“Get Your Kicks on Route 66” is a popular refrain from the 1946 song that was made famous by Nat King Cole and subsequently was recorded by dozens of other artists including Chuck Berry, Asleep at the Wheel, and Michael Martin Murphy. While vestiges of the old highway that wound “from Chicago to L.A.” still remain (notably in the California desert and various parts of New Mexico and Oklahoma), much of it has been replaced by Interstate 40. But don’t despair, you can get your kicks on any number of highways that crisscross the U.S. You just have to take that long dreamed about road trip!

After over 40 round-trip drives across the U.S. I can safely claim my status as a road trip expert. Many people wonder why anyone in his right mind would want to spend a week or so driving 3,500 miles when you can travel coast to coast by plane in 6 hours. Those people probably haven’t flown in a middle seat in economy on one of the major airlines lately! But others have confessed to me a desire to embark on a cross country trip at some point in their lives, and I encourage them to follow that dream. There is no better way to really get familiar with this amazing country, to experience the fantastic scenery, the friendly people, and the delicious food that waits than being the master of your own destiny behind the wheel of a car.

My general recommendations for such a trip are to be sure you have reliable wheels, to try and get off the interstates as much as possible, and to avoid eating at fast food chains in favor of the local, “mom and pop” types of establishments that give you a real taste of the places you’re visiting. In this multi-part post I’ve broken the country up into several geographical areas and recommend some of the best routes to take, sights to see, and most importantly, places to eat along the way. In this segment we’ll look at the American Southwest and the Rockies. In the next installments I will cover the Midwest, the South and the Northeast and New England.

Just me and the truckers at sunset near Price, Utah

My version of a Conestoga Wagon: my old car made 10 round-trips coast to coast!

Part I: The Southwest
Probably my favorite partof the USA is the American southwest… the scenery of Nevada, Arizona, Utah, New Mexico and Colorado is simply stunning, offering cosmopolitan cities like Las Vegas, Denver, and Santa Fe, mountains, hot springs, deserts, and red rock formations that one would expect to find only on Mars. I would say that some of the very best scenic drives in the United States are in Utah. After visiting the fantastic Zion and Bryce National Parks in the southwest corner of the state (Bryce Canyon is probably my favorite park in the entire U.S) follow Scenic Byway 12 through Escalante, up and over Boulder Mountain, and into the red rock country around Torrey, Utah. You can also brave the unpaved Burr Trail which intersects Route 12 near Boulder, Utah for a bit more back country experience. The views and the changes in terrain are simply unbelievable. Another fantastic drive leads east from Torrey on Route 24 through Capitol Reef National Park, and continues south on Route 95, cutting through the heart of the red rock territory and skirting Lake Powell. Finally, head south on Route 261 which literally takes you to the edge of a cliff. Make the descent into the Valley of the Gods below on the spectacular series of switchbacks called the Moki Dugway, finishing the trip in the town of Mexican Hat. Be sure to explore the unpaved but fairly tame drive through Valley of the Gods for an up=close look at this remote corner of Utah. A third route that shouldn’t be missed is Route 163 which starts near the town of Bluff, Utah through Mexican Hat and into Arizona and Monument Valley, home to a Navajo reservation and enormous stone formations called “The Mittens” that have been featured in several old western films.

Along the Road near Hansville, Utah

One of the Mittens, Monument Valley

Other must-see sights include the one and only Grand Canyon in Arizona, Arches National Park in eastern Utah and Mesa Verde National Park in Colorado, which features ancient native American cliff dwellings. Colorado boasts a couple of great places to soak your bones after a long day’s drive or a day on the ski slopes. Steamboat Springs, in the northwest corner of the state, is a small skiing mecca that has a developed hot springs spa in the town center. But for the ultimate thrill, drive up to Strawberry Hot Springs, in the mountains about 10 miles outside of Steamboat. Winter is my favorite time to come here, though 4 wheel drive is necessary then. From the parking area, you hike down to three 3 large pools of varying temperatures fed by a hot spring and situated along a river. The pools are nicely built of flagstone and have stairs and hand railings, but otherwise the area is completely undeveloped, meaning that there are no lights; bring a flashlight if you visit at night! One of my most magical memories is soaking in these springs on a winter night when the temperature was only 5 degrees Fahrenheit, snow flurries landed on my head, and brilliant stars twinkled above whenever there was a break in the cloud cover. If you prefer a more “civilized” experience, Pagosa Springs in south central Colorado features a facility with about 20 hot tubs of varying temperatures, fed by natural hot springs, overlooking the river. 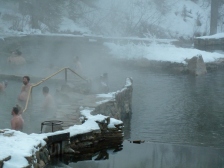 Close-up of the pools at Strawberry, Temperature about 5 degrees Farenheit

Now for the food. Some of my favorite stops as I travel through this area are out of the way spots that only locals know about, so get away from the tourist areas and fast food and find these hidden gems.

In Las Vegas, check out the Baguette Café, a tiny piece of France located far from the Vegas strip in a business park at 8359 W Sunset Road. You may have a little trouble finding it, but believe me, you will be happy you did! Your host is Olivier, whose passion for baking and creating food using only the best ingredients is boundless. The omelets, quiches, sandwiches and innovative soups are all excellent, but the freshly made croissants, pain au chocolate, lemon tart, cheesecake and other pastries are perhaps the best part. Olivier also makes awesome organic fruit smoothies and truly, the best iced mocha I think I have ever tasted. Get away from those breakfast buffets on the Strip and have a taste of France instead!

Olivier and his pastries when I first visited in 2012 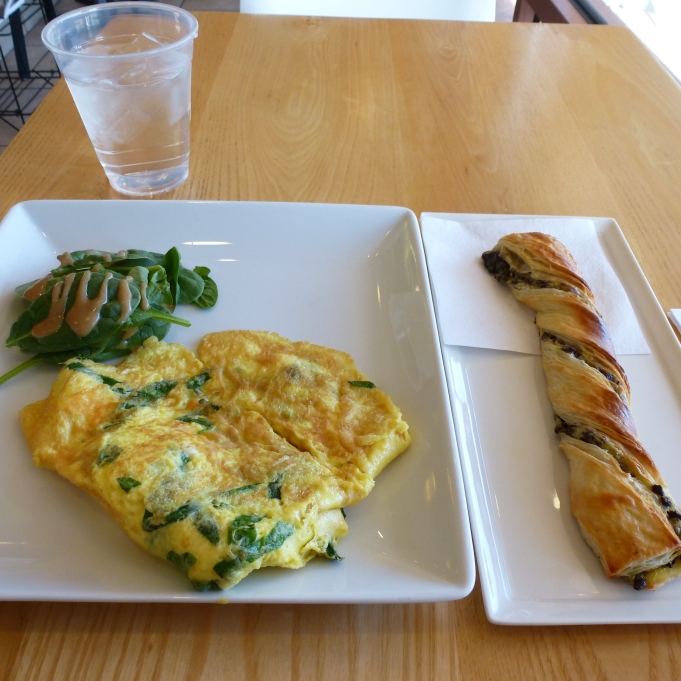 A beautiful breakfast at the Baguette Cafe

In Utah I satisfy my cravings for pie in two very off the beaten track spots: In St. George, be sure to visit Croshaw’s Pies at 175 W 900 South. They feature both fruit and cream pies, sold whole or by the slice. They also serve pot pies, sandwiches, and soups, but I will confess, I just have pie for lunch. Another place for pie is so good and so popular that I’ve actually called ahead and asked them to set aside pies for me to ensure they won’t be sold out by the time I get there. It’s located in the Gifford Homestead, a historic site inside of Capitol Reef National Park in Torrey. They sell mini-pies which would satisfy two people who possess great self-control, but of course I can eat one in a sitting. My favorites are the cherry and the strawberry-rhubarb, and as someone who eats a lot of pie, I would rate these as some of the best I have ever tasted.

After going into a pie-coma as you exit Utah, stop in Colorado’s Grand Junction and have a meal at the oddly named Bin 707 Foodbar. Located a few miles off I-80 in the downtown area at 225 S. 5th St, #105, the Bin features local cheeses and meats and seasonal local vegetables. Their menu is exciting and innovative, and this has to be some of the best food to be found anywhere between Salt Lake City and Denver.

The Pie Cabinet at Gifford Homestead

Once you get to Denver, make a bee-line for Sassafras American Eatery, a small chain of three restaurants in the metropolitan area serving breakfast and brunch. One of the most unique dishes I have had anyway is the Chicken Fried Eggs, soft-boiled and coated with a crispy coating, sitting atop buffalo meat hash and cornbread. When you cut into your crispy egg, the yolk runs into the hash and cornbread. Beautiful! They also have killer biscuits, sweet potato grits, and fried green tomatoes. A taste of the south at the base of the Colorado Rockies.

If you are craving Mexican, Tamayo on Larimer Street offers upscale Mexican cuisine in a beautiful setting, while Machete’s three locations serve up really innovative tacos and quesadillas. For steak try the Chop Shop on East Colfax or Lowry, a casual place where you order at the window and are served at your table. The steak and all the sides are delicious and very reasonably priced. And if you can possibly pull yourself away from Sassafras for breakfast, try any of the locations of the local chain Snooze, which features amazing pineapple upside down pancakes and just about any other breakfast or brunch foods you prefer. There’s also Voodoo Donuts on Colfax, a place featuring every type of doughnut known to humankind and where you should prepare to wait in a long line just about any time you go. You will never be at a loss for places to eat in Denver. 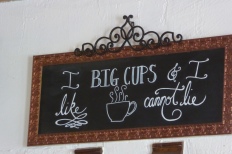 This gave me a laugh at Sassafras 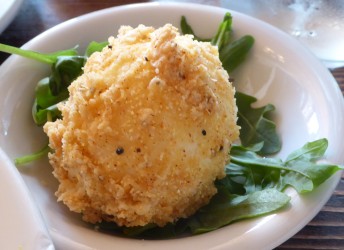 Portrait of a chicken fried egg

The Pancake Flight at Snooze, Denver

Finally, if you happen to be driving in New Mexico you should be sure to sample some of this area’s southwest cuisine, which is sort of a marriage between Mexican and Native American. My favorite item on the menus down here are stuffed sopapillas, which resemble Indian fry bread, and are stuffed with various fillings much like a burrito. Sopapillas are also served with a dusting of confectioner’s sugar and/or honey for dessert. Aside from some of the famous restaurants of Santa Fe and Albuquerque, a couple of my favorite off-the-beaten-track places to sample them is Abuelita’s New American Kitchen in Bernalillo, about 20 miles north of Albuquerque or Genaro’s in Gallup, just off I-40.

A stuffed sopapilla, and a sopapilla with honey, Abuelita’s, Bernalillo, New Mexico

When you have had your fill, it’s time to continue your journey into the Midwest if you take a northern route or into the South if you take I-40. Stay tuned for more installments about these areas, as well as the Northeast and New England!

One thought on “You Don’t Have to Take Route 66 to Get Your Kicks! American Roadtrip, Part I: The Southwest”

This site uses Akismet to reduce spam. Learn how your comment data is processed.

Where do you want to go?